I had a work conference in New York City last week and hubby tagged along as my adventure and foodie partner.

We arrived on Wednesday, checked into our hotel and headed out to explore. 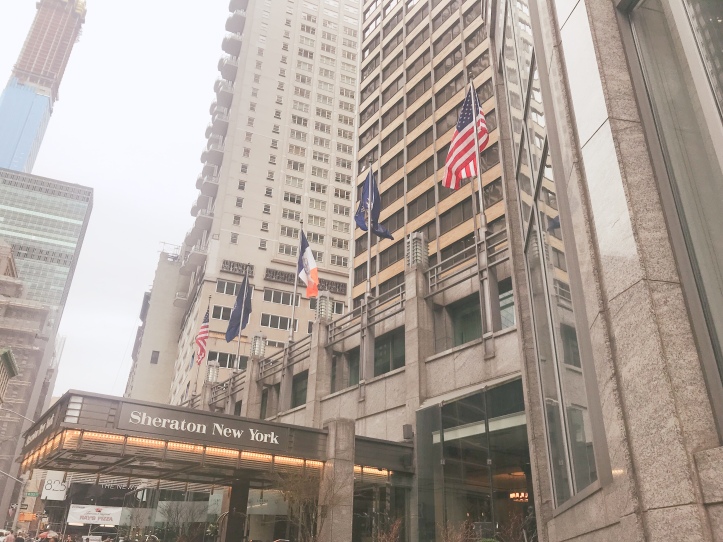 We took the subway to lower Manhattan. The Statue of Liberty seemed so much smaller than I remember her! After exploring Battery Park, we walked north towards Wall Street to catch a glimpse of the Charging Bull and grabbed gyros and knish from a street vendor for lunch. 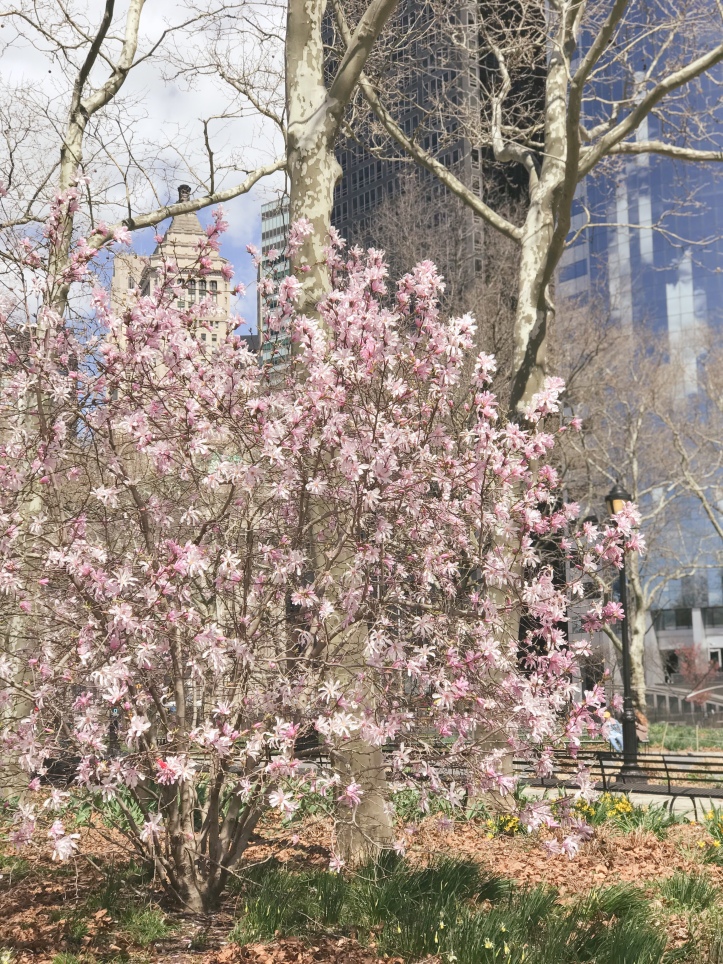 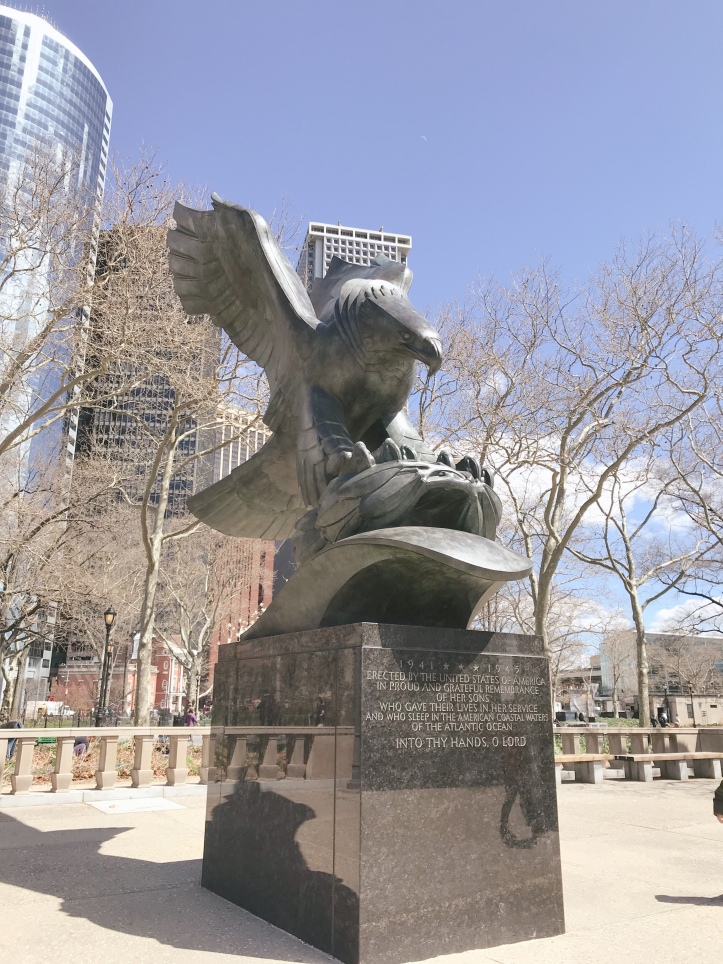 We then made our way to the September 11 memorial. I knew this would be incredibly emotional for me, but, my goodness.. I still underestimated it. The twin reflecting pools were built in the original footprint of the Twin Towers and measure nearly an acre each. The museum was equally impressive and devastating to re-live the nightmare of that horrific day. Although I was one of the lucky ones and did not lose a loved one, it was a day that influenced my brothers to join the Marine Corps. As I wandered through the exhibits and listened to the stories, I couldn’t help but cry.. all those people who didn’t make it home, who couldn’t tell their family members they loved them again, who couldn’t kiss their children goodnight again, who couldn’t grow old. An absolute tragedy. 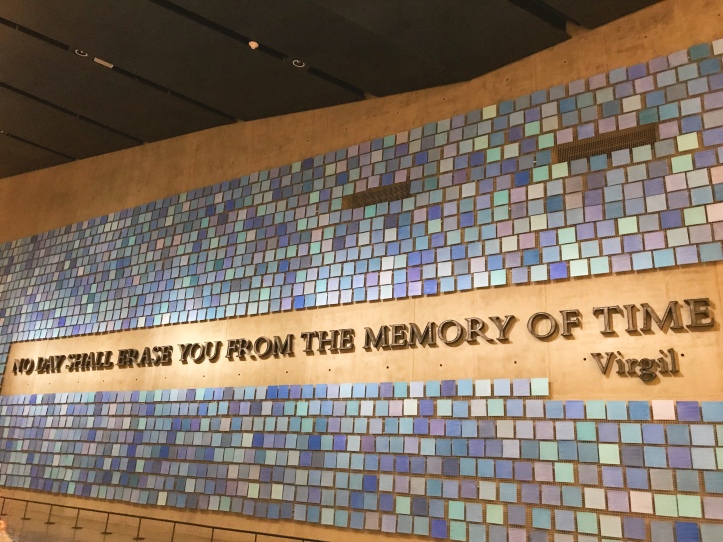 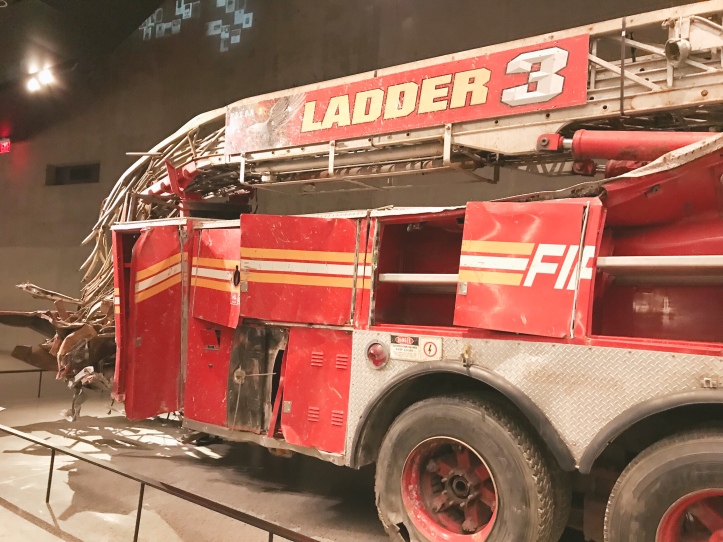 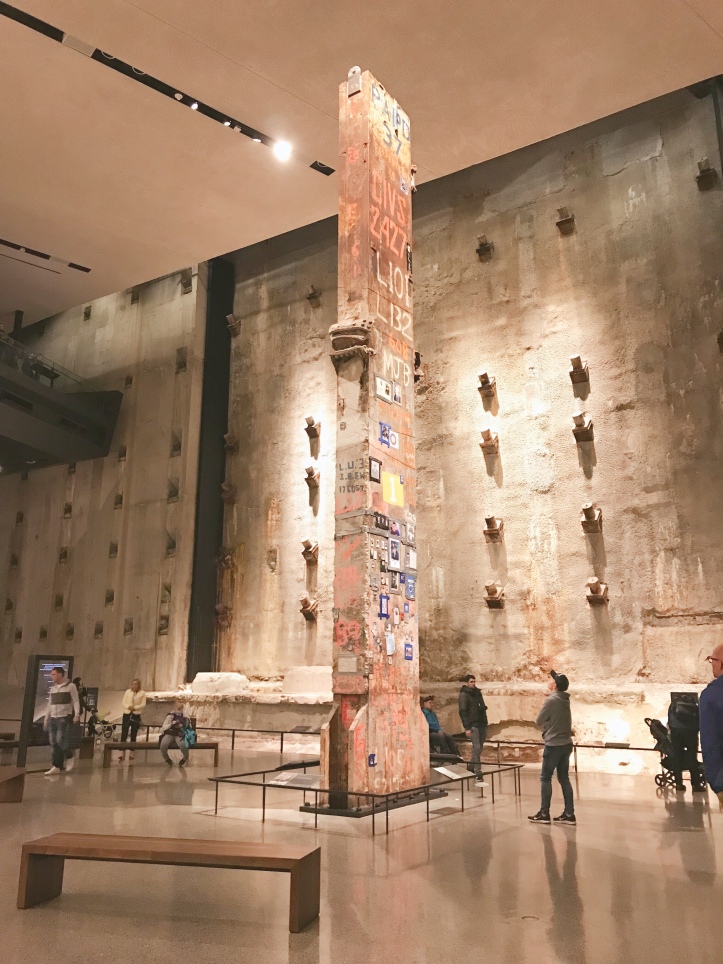 There was a staircase along Vesey Street that was an escape route for victims after the attack. 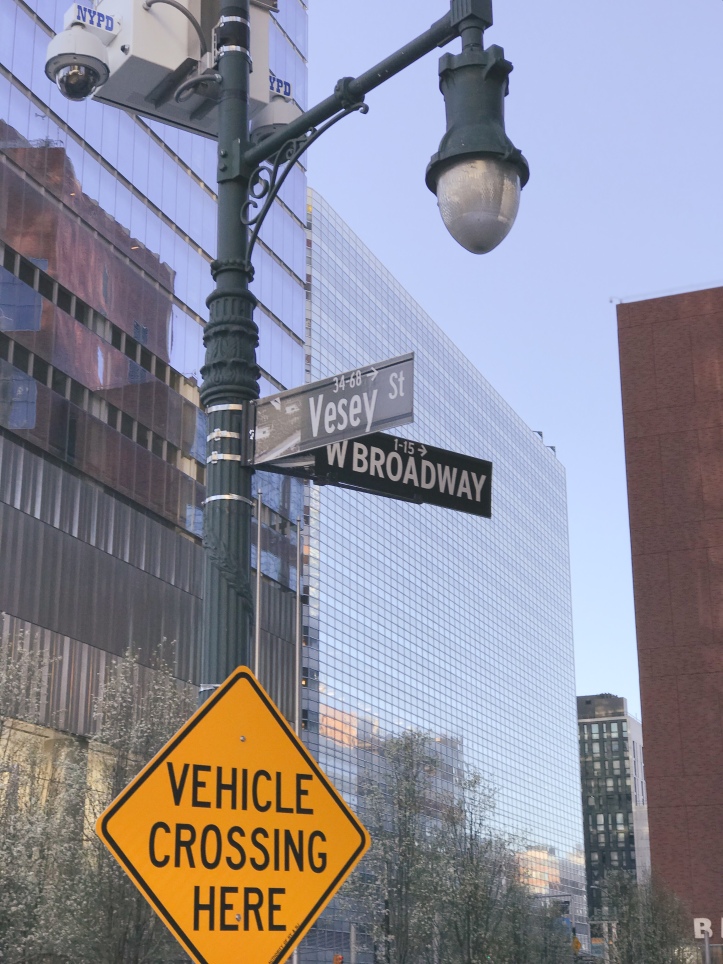 After a sad afternoon, we needed a pick-me-up so headed to Laduree for the best French macaroons ever.

We stopped at McSorley’s Ale House for a sip of history as it is the oldest continuously operated saloon in NYC being established in 1854.. even Abraham Lincoln visited and women were finally allowed entrance in 1970! They only have two options.. light or dark ale.. and both are actually rather delicious! 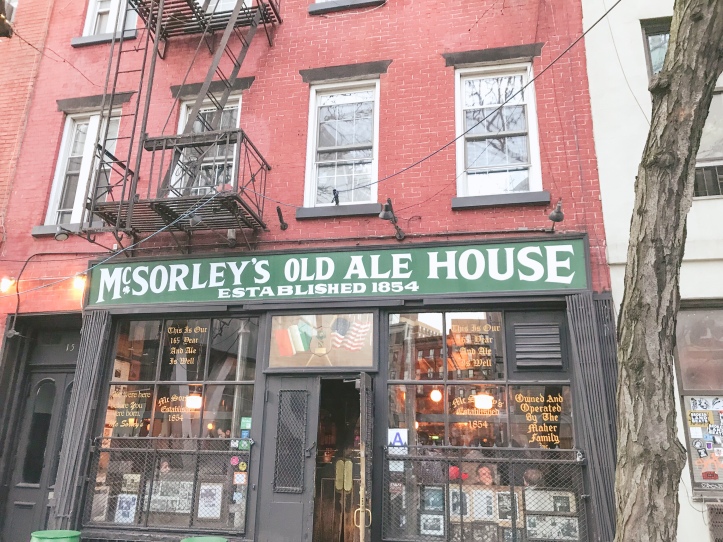 Dinner was enjoyed at Gemma.. a rustic Italian restaurant with a cozy atmosphere and delicious food! 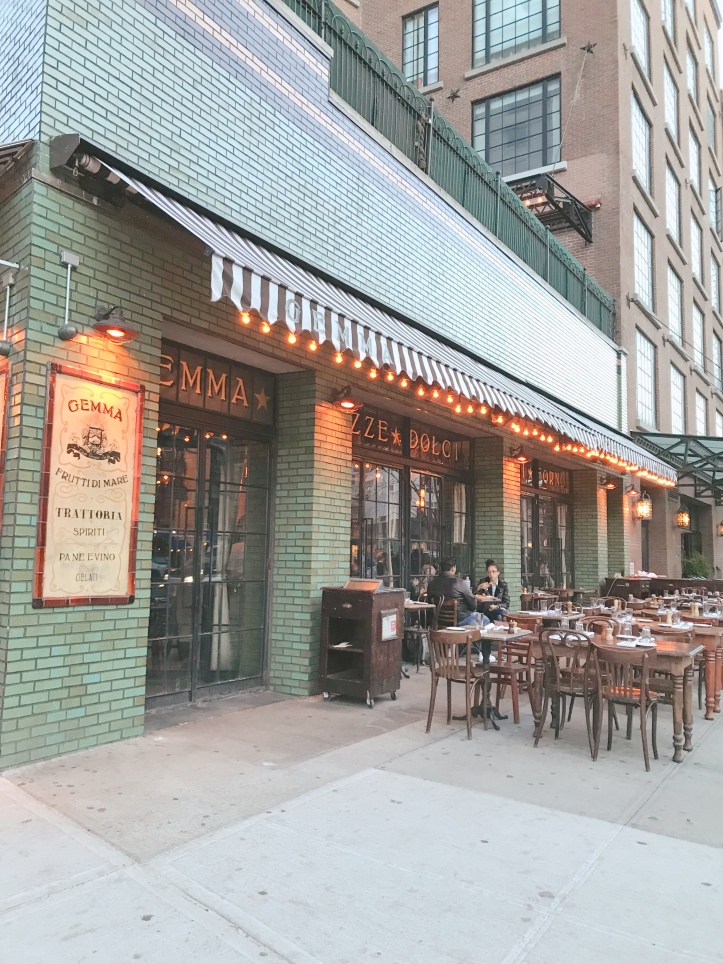 We were so full from dinner and decided a long walk back to Times Square was exactly what we needed.. especially since we were able to make room for M&Ms! 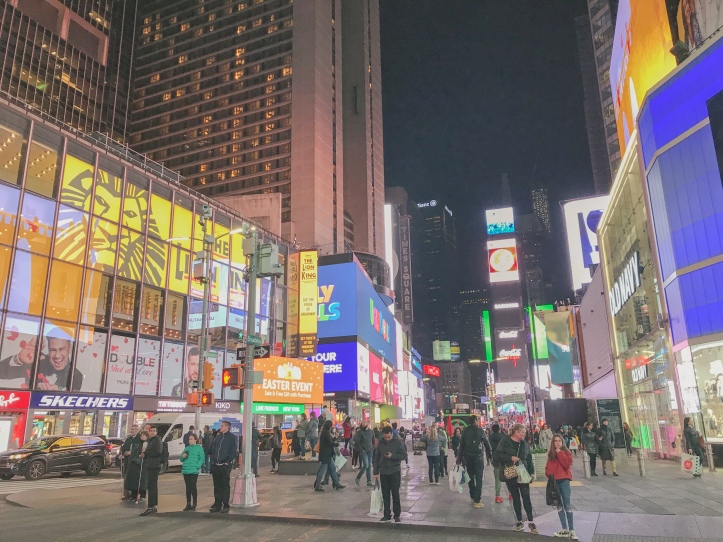 We spend the late morning wandering through Central Park and I was in heaven.. remember how much I love wandering through parks? I was only missing our girls. Although I love NYC, it can be overwhelming and so congested. This park, however, must be a saving grace for people! It’s massive and filled with beautiful paths, ponds, playgrounds and flowers. 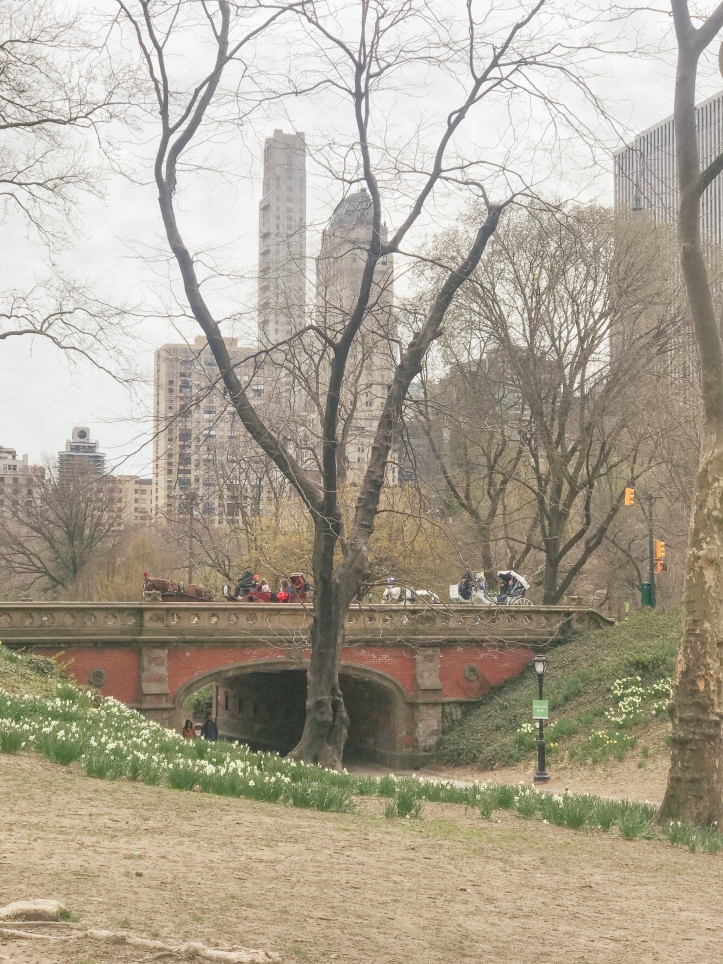 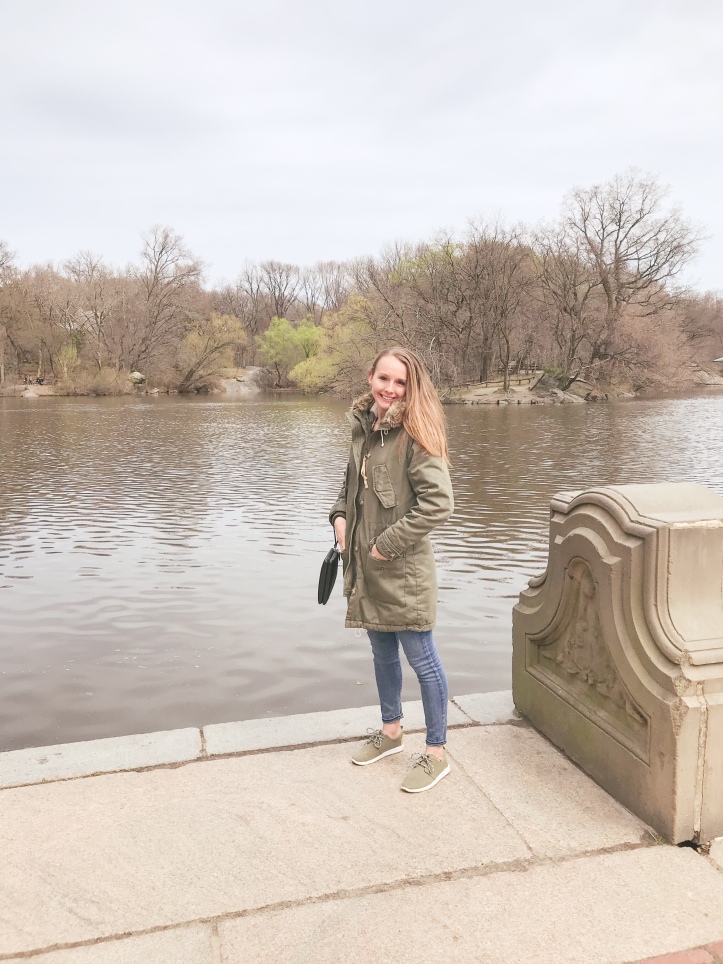 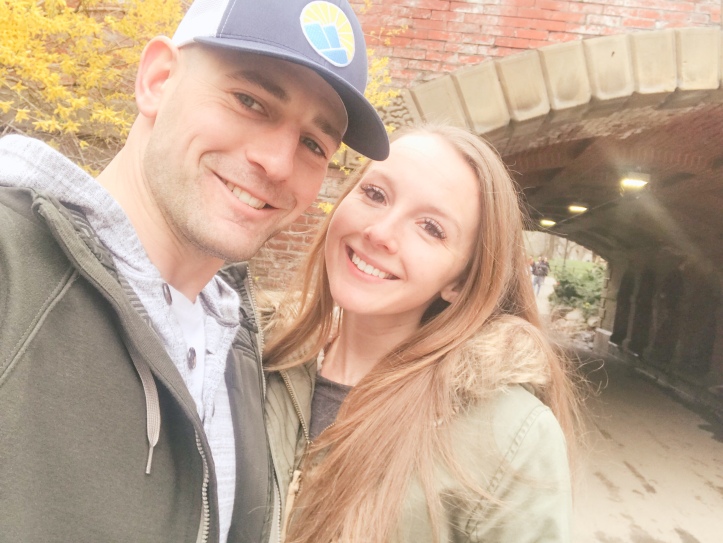 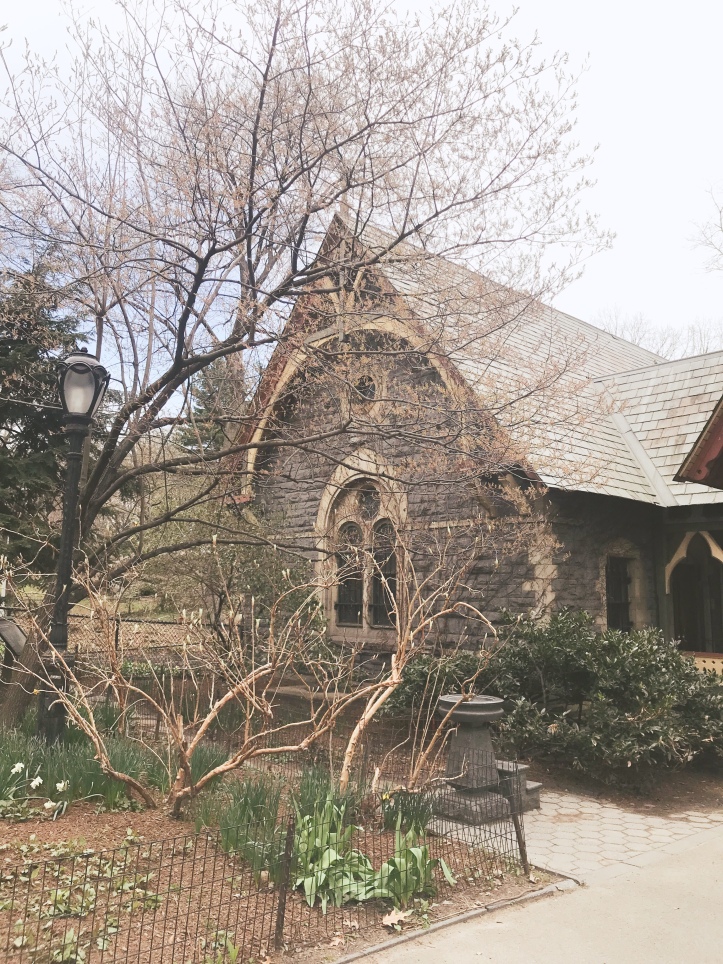 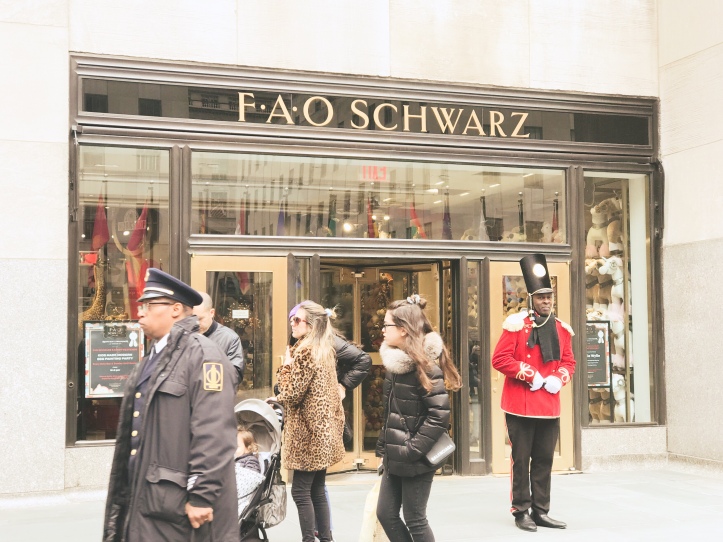 We had to see what all the hype was about surrounding Magnolia Bakery. The slice of cake and banana pudding we shared were worth the long line! 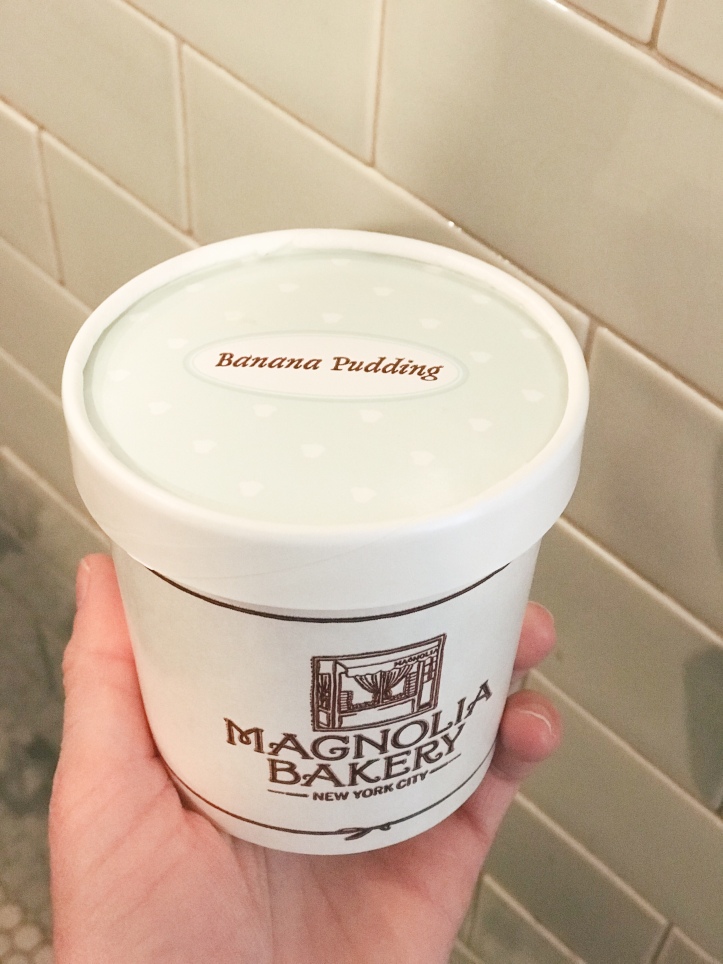 While we were in Napa in January, we signed up for the Stags’ Leap wine club and they happened to be having an event in NYC while we were there. Multiple Napa wineries were in attendance offering tastings of some of their best wines. It was the perfect opportunity to get dressed fancy at the swanky Lightbox. 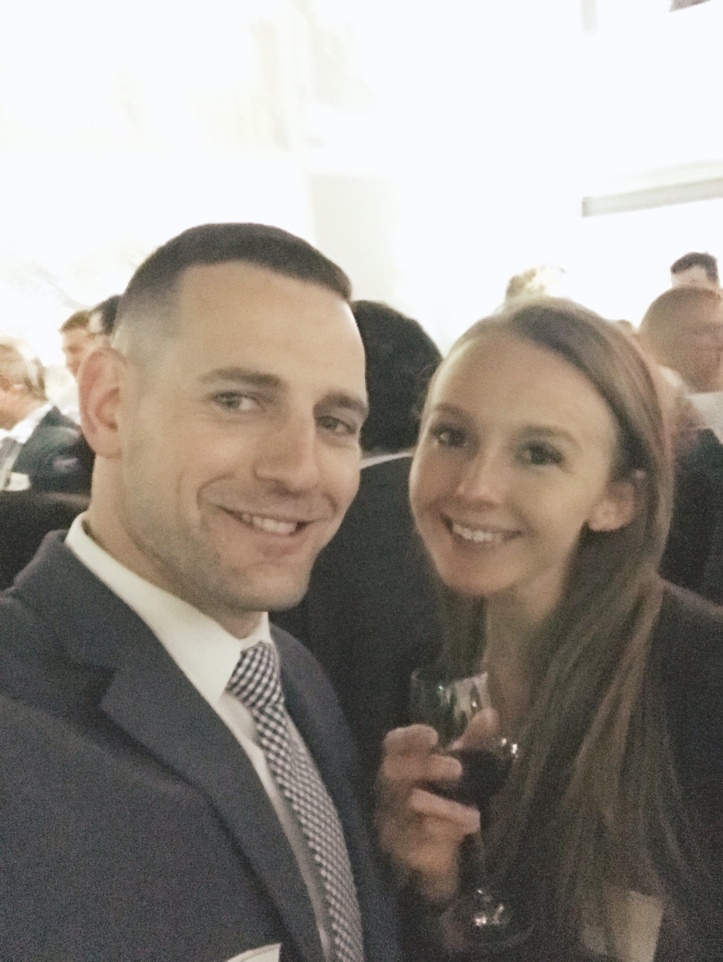 Since we didn’t eat dinner before the wine event and we just so happened to walk by Joe’s Pizza so we had to stop in (according to my favorite NYC blogger, this is the best pizza in the city)! She was right.. and I was apparently too buzzed to be taking pictures since I cut off part of the sign. 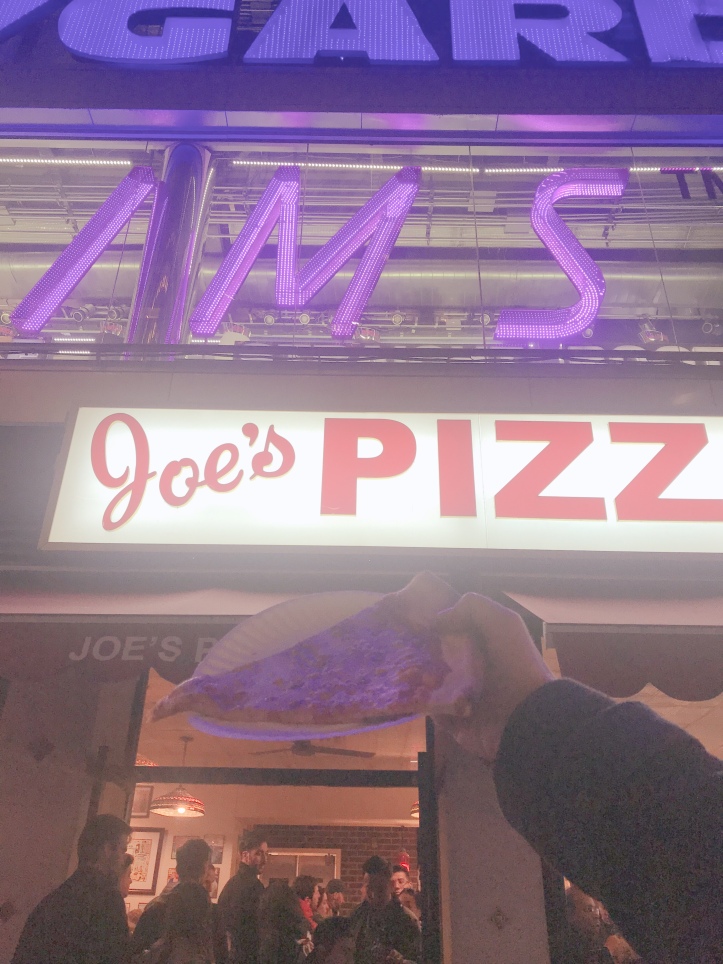 Friday we explored Grand Central Station which was unbelievably impressive. It was like a small city mostly underground and so many delicious looking food spots.. including the best bagel I’ve ever eaten. 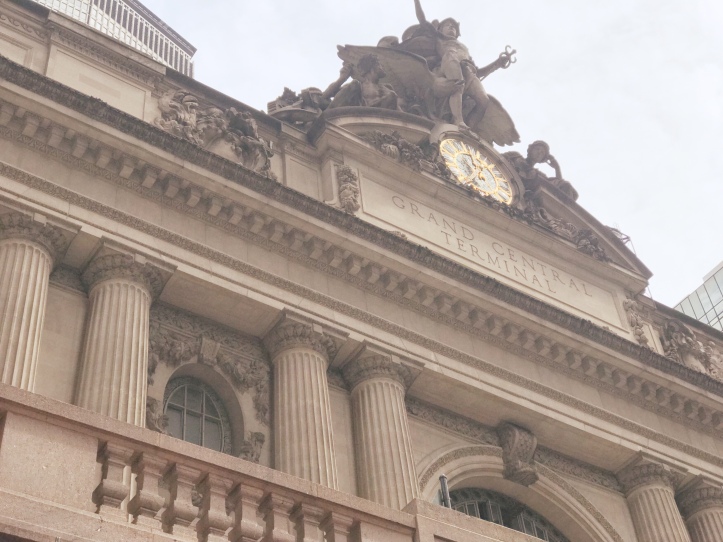 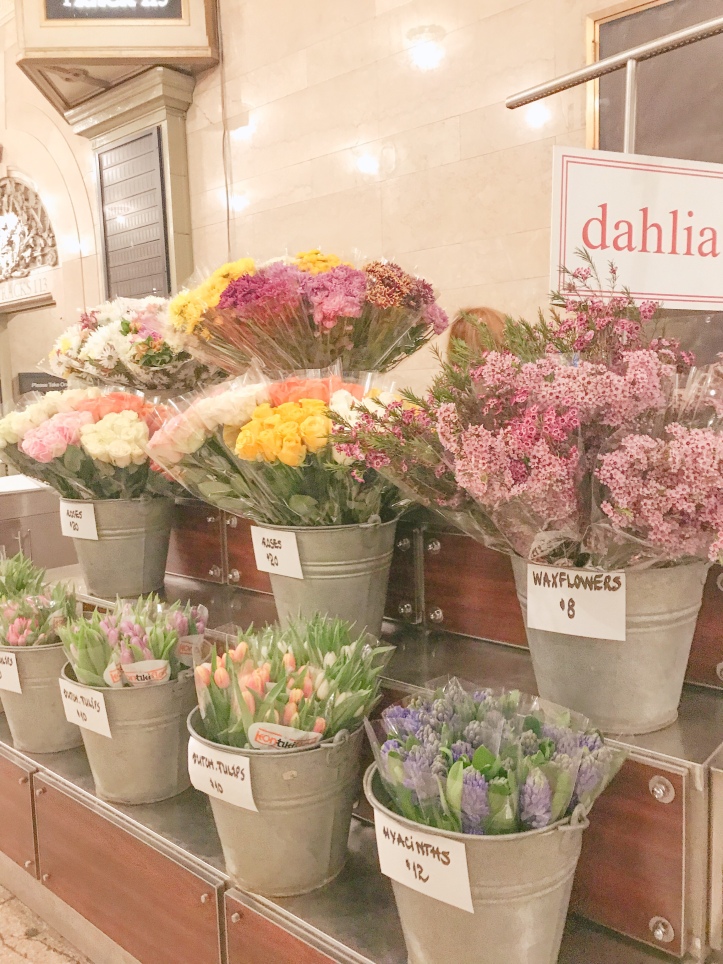 Over the hustle and bustle of the terminal, you can stand in opposite corners of this arched acoustic masterpiece and hear each other whispering. I didn’t believe it until we actually tried.. it worked!

While heading towards Chelsea, we found the cutest little dog park. 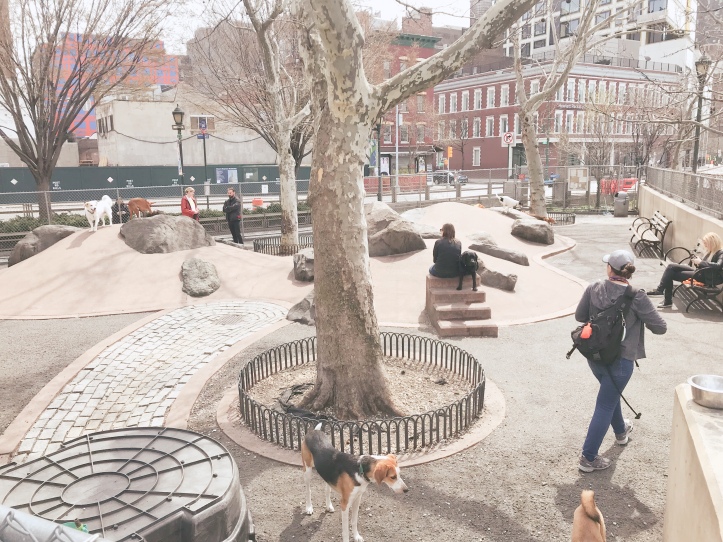 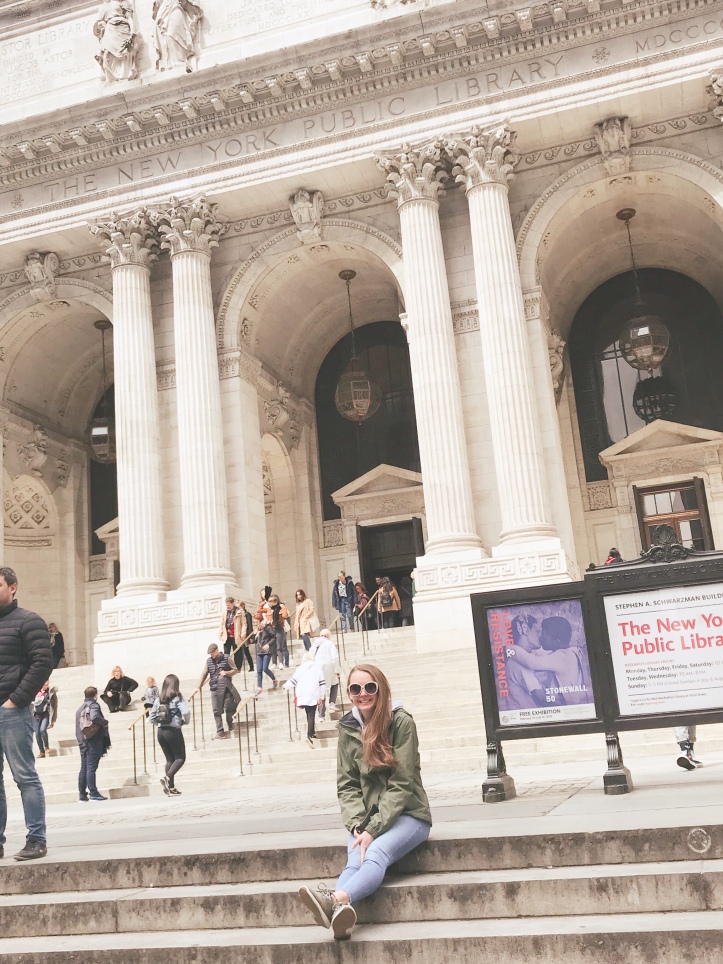 Chelsea Market is filled with the cutest shops and a foodie heaven. Thankfully hubby doesn’t mind sharing food with me so we are always able to try so many more things! Mini donuts, street tacos and oysters (with a side of prosecco and cider). There were SOOO many other placed we wanted to try but were too full! 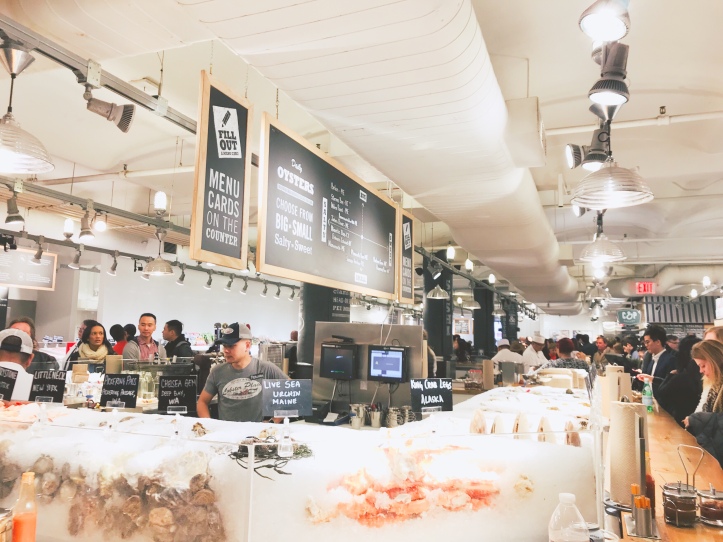 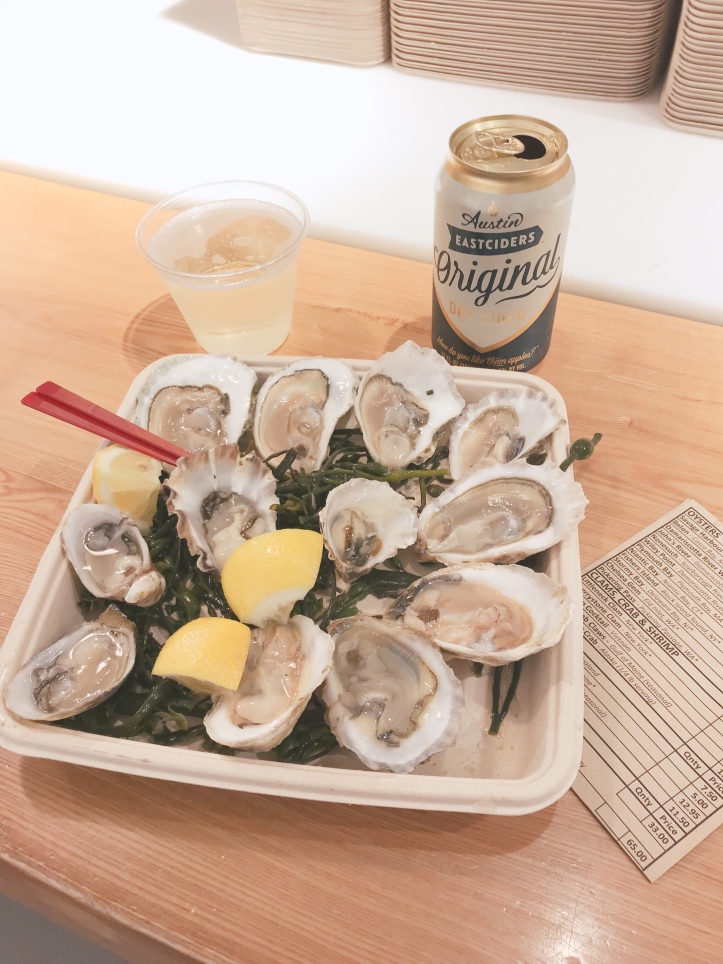 We grabbed some more macaroons before heading back to the hotel.. we ate 2 dozen in 2 days.. whoops! But they were so good!! 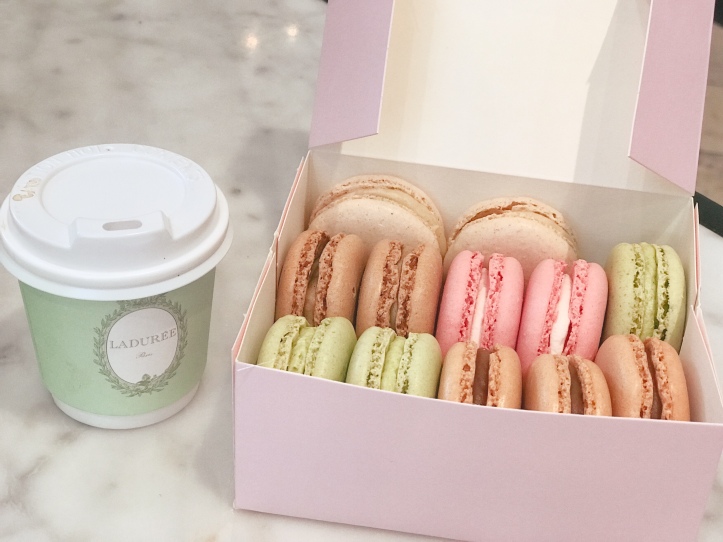 For dinner went to an awesome Italian restaurant called Aria Wine Bar. The food was so delicious and the vibe was amazing. They have 3 restaurants with different names and the exact same menu (kind of confusing) but I’m sure all are equally good! 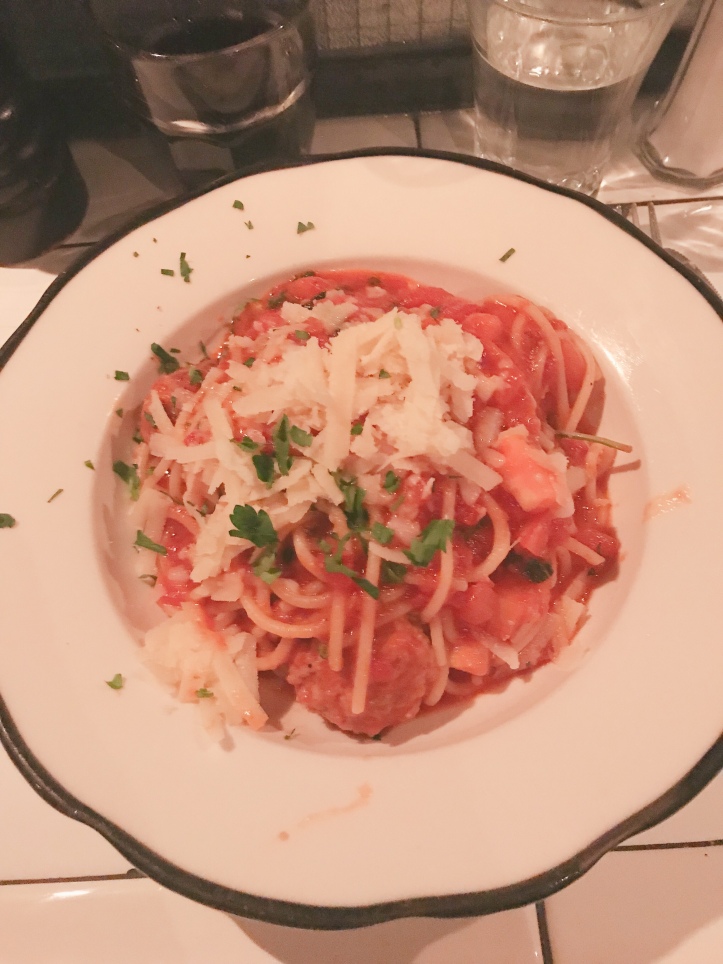 A quick breakfast at Brooklyn Diner before heading home. It was an amazing trip but we were both ready to be home with our puppies, trees and quiet! 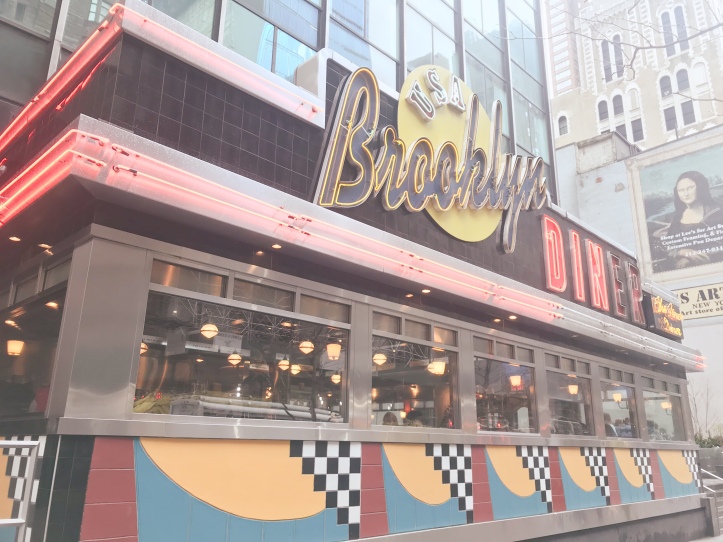 Soaking up all this sunshine ☀️
My beach girl 🐶
I love doing life with you 🤍
Mornings.
our happy place 🌊
Long shift done, rainy morning with nothing to do and my favorite meal of the day ☕️ Happy Monday
Loading Comments...
%d bloggers like this: